A Pair of Pearl PhoenixHairpin

Wen Bizheng, an outstanding scholar fromLuoYang, encountered Huo Dinjin,a talented lady at the Wenxin Temple. By chance Wen got the pearl phoenix hairpin left by Huo. He seek for further contact withHuo, but was prevented by Huo’s maiden: Qiuhua. Then Wen sold himself as a servant to Huo’s house. He finally got a chance to send lotus to Huo. However,Qiuhua stopped him again. During the conversation with Wen, Qiuhua was impressed by Wen’ s talent and deep love. She then introduced Wen to Huo. They decided to get married.

Zhu Yingtai convinced her father to allow her to attend Wangsong College at Hanzhou disguised as a man. During her journey to Hangzhou, she met Liang Shanbo, a scholar who also on the way to Wangsong College. They met by trying to catch a butterfly. While chatting they learned that they would soon become schoolmate. They find themselves holding the same opinion on whether girl should be educated or not. They felt a strong affinity for each other at their first meeting. Liang Shanbo proposed them become sworn brothers. Zhu Yingtai agreed joyfully. They used butterfly as incense and took an oath of fraternity at a thatched bridge.

– At the Lotus Pavilion

Liang Yushu is the son of the bad crafty Prime Minister Liang Rulong. He encountered the girl Xie Yunxia and fell in love with her. Liang Yushu asked his friend Liu Renyuan to propose a marriage with Xie. However, Xie’s parents were murdered by Yushu’s father. Desiring the revenge, Xie married Liang but completely ignored her husband. Yushu was deeply in love with Yunxia and tried to find out the reason for her ignorance. After he knew the truth at Mid-Autumn, he determined to help Yunxia.   Later on, Yushun excelled the national scholastic exam. His father forced Yushun to divorce Yunxia and marry the royal family. Liang refused. His mother further tried to hurt Yunxia, while Yunxia escaped. Liang could not find Yunxia, then confronted to his mother ask for his wife. With the help of his friend Liu Renyuan, Yushu and Yunxia finally reunited and left Liang’s family.

Lin Fengchun, the son of the imperial minister official, went for sight seeing during the Lantern Festival.  He saw tofu shop owner’s daughter and was deeply attracted by her beauty. He managed to free himself from servants and went to tofu house to see her late at night with an excuse to borrow a red lantern.  Luckily Jinfeng’s dad was not home. Lin Fengchun had time to find out how Jinfeng feels about him. When he was asured that Jinfeng is the ideal girl he has been looking for, he gave her the dragon phoenix necklace, a gift from emperor, his god father, to promise their future. When the two were in an inextricably talking, suddenly, Jinfeng heard her dad coming home. Out of panic Lin Fengchun hided himself in a large wood crate and was suffocated to death.  Later, Lin Fengchun was saved by a deity.  After several twists and turns, they finally got together and married.

Liu Jinding, General Liu Tianhua’s daughter, was rewarded Madam Royal for her bravery military service against the enemy. The emperor announced that anyone dares to peep her will be beheaded. Feng Jiajin admired this female hero and wanted to see her in person. When Madam Royal went to Dongyue Temple to pray, he dressed himself as a peasant, hided under the altar and tried to peep. Unfortunately he was caught by Madam Royal. He made up a story that his name is Zhang Xiaoer. Madam Royal excused him and released him. However, when she realized that the guy was actually came for peeping her,she then fell in love with this brave man and got lovesickness. General Liu had to report to the Emperor for recruiting a doctor to cure Madam Royal’s unknown disease. Feng Jiajin pretended to be a doctor and applied for this job. He visited Madam Royal’s boudoir twice as a doctor. Totally three times meet-up.

happened on the third time meet-up. After Madam Royal’s interrogation, Feng Jiajin finally admitted his real name and expressed his love to her. Madam Royal gave him a double-linked pens for engagement.

Scholar Shen Guisheng married Zhang Yayun, who was the promised wife of him before he was born. Trying to divert himself and flee from the turbulent marriage, Shen Guisheng came to the Fahua Temple. At his first sight of Wang Zhizhen, a Buddhist nun, Shen Guisheng fell into love with her. Although Zhizhen was well disposed towards Guisheng, as a Buddhist nun, she was afraid to accept Guisheng’s love. During the tour at Fahua Temple, Guisheng tried hard to pursuit her and finally dispels all her worries. Zhizhen accepts Guisheng’s love and they live happily together.

A Dream of Red Mansion –

Perfect Marriage Between the Gold and The Jade

〈A Dream of Red Mansions〉is adapted from the famous Chines novel by the same name written by Cao Xue Qin.  The novel is also known as “ The Story of Stone”.  The Yue Opera focuses on the tragic love between Jia Bao Yu and Lin Daiyu.  Baoyu was born with a piece of luminescent jade in his mouth.  His family had high expectation from him.  Daiyu, Baoyu’s first cousin and his love interest, is beautiful but emotionally fragile and prone to fits of jealousy. Xue Baochai is Baoyu’s first cousin from his mother side.  She carries a golden locket which contains words given by a mysteries monk.  In the eyes of the grandmother and the parents, Baochai is perfect for Baoyu.  However, sharing the same philosophy, Baoyu fells in love with Daiyu which is not allowed at that time.  When Daiyu learns that Baoyu is going to marry Baochai, she died with sorrow.  On the other hand, Baoyu is so excided to marry Daiyu.  However, when he opens the bride’s red cover and find the bride is not Daiyu. 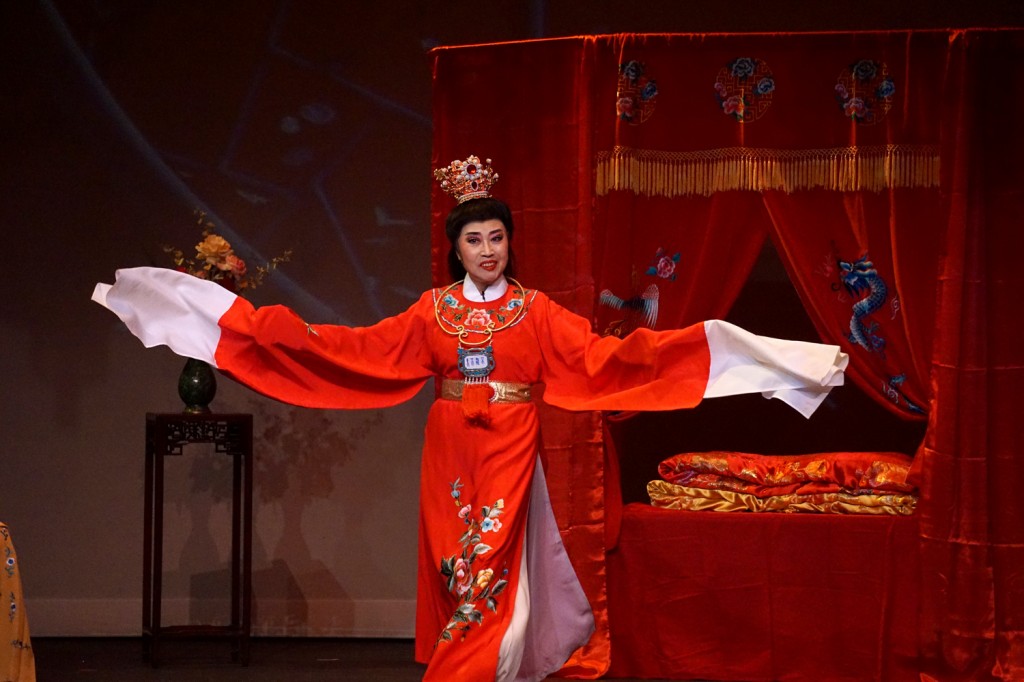 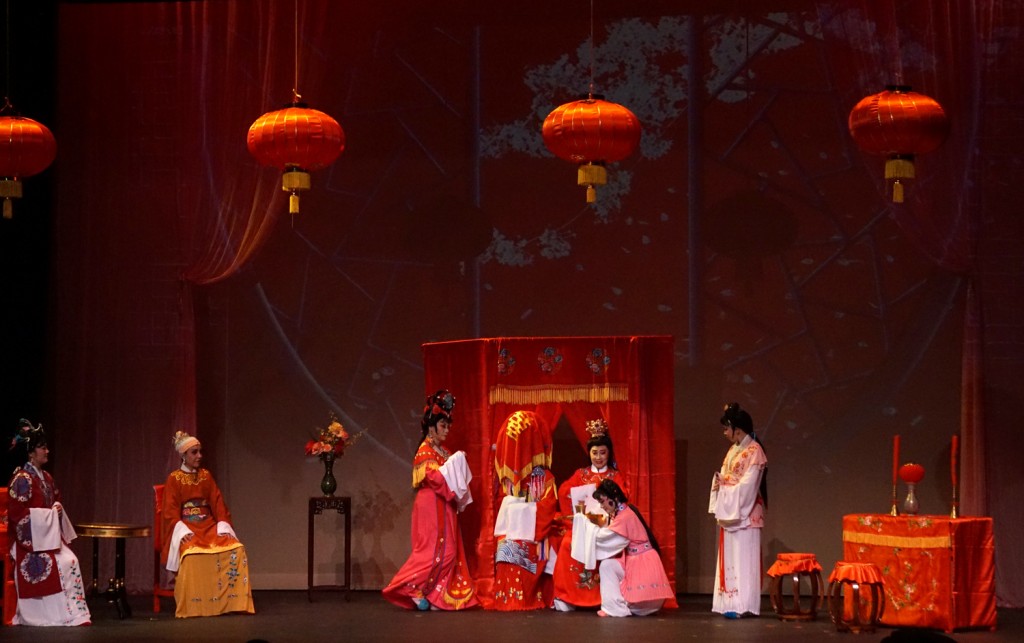 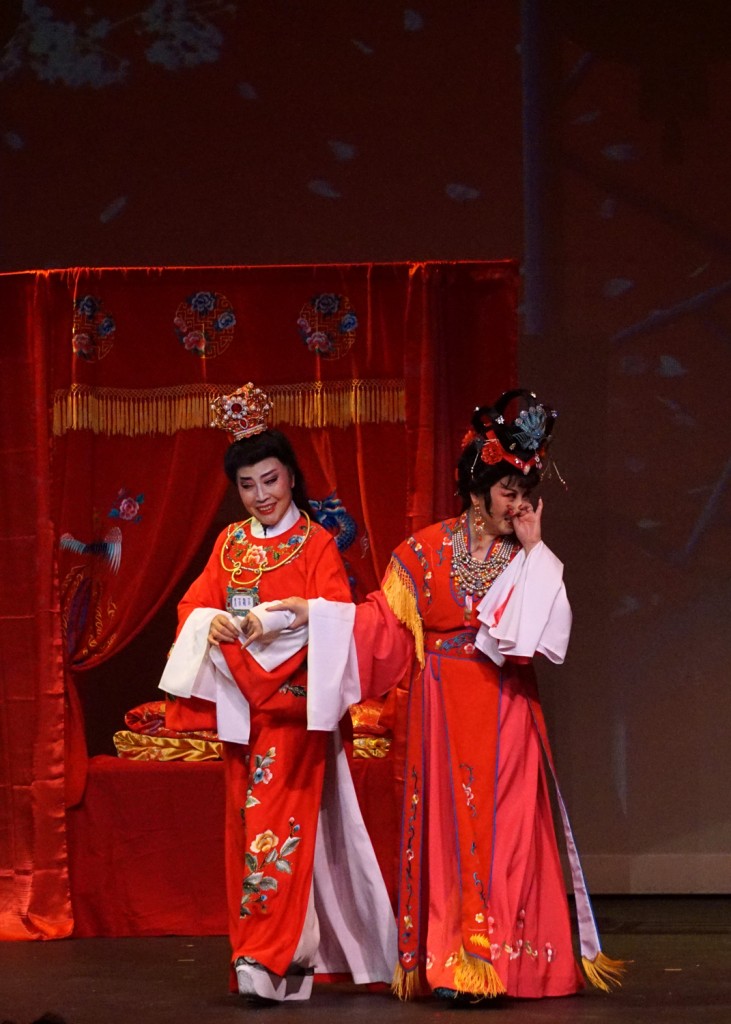 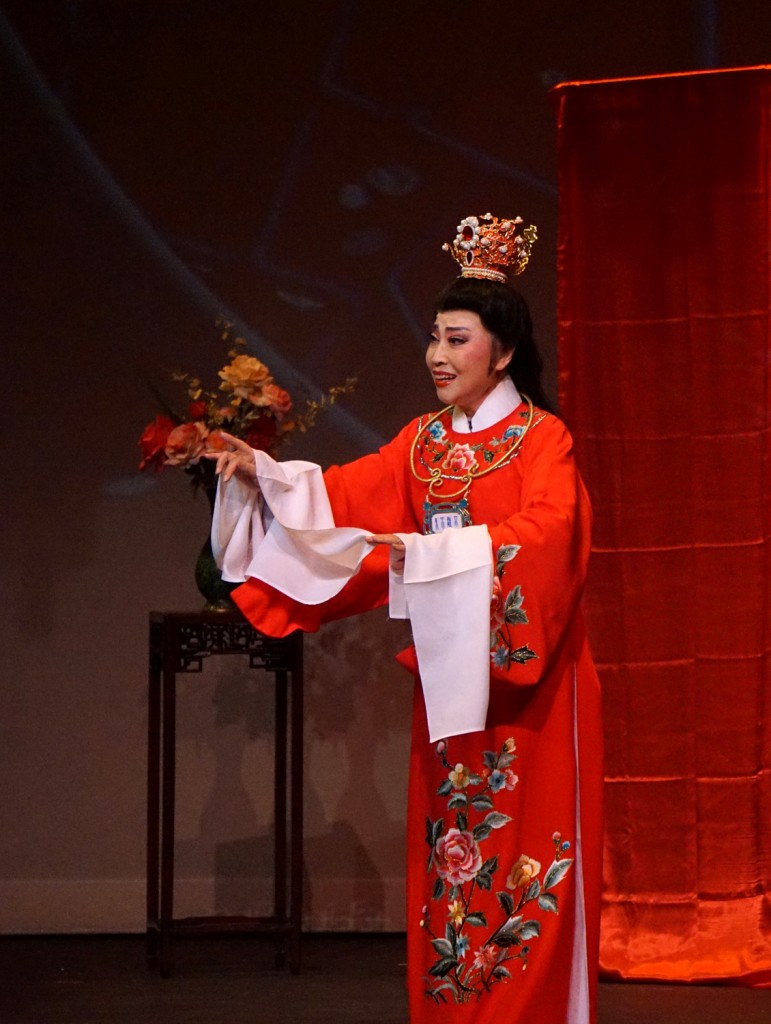 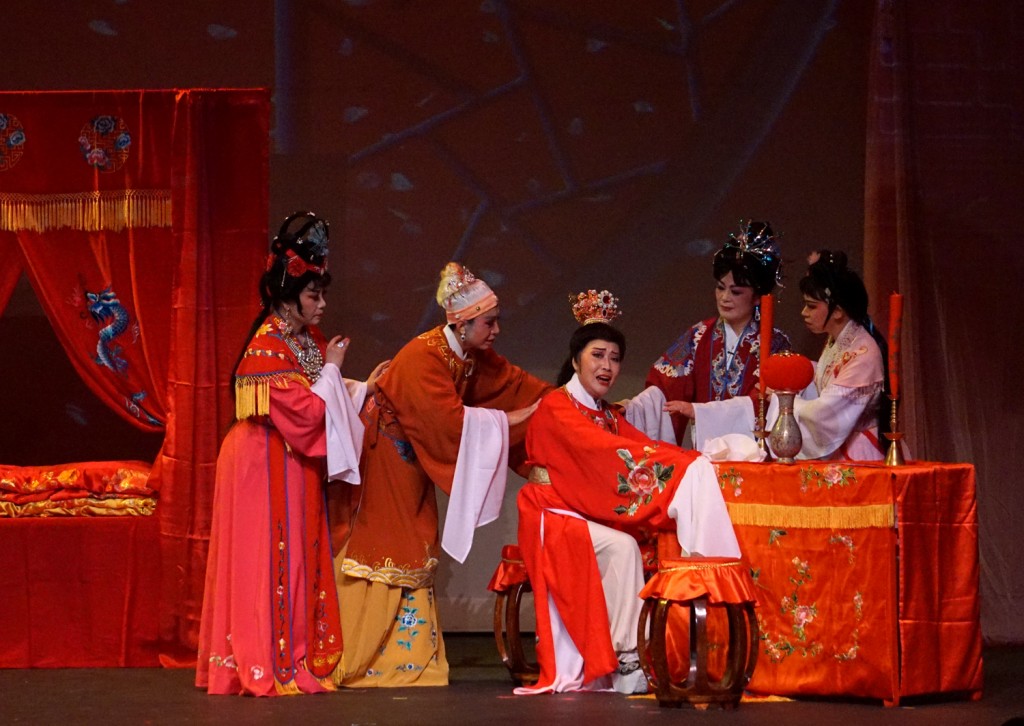 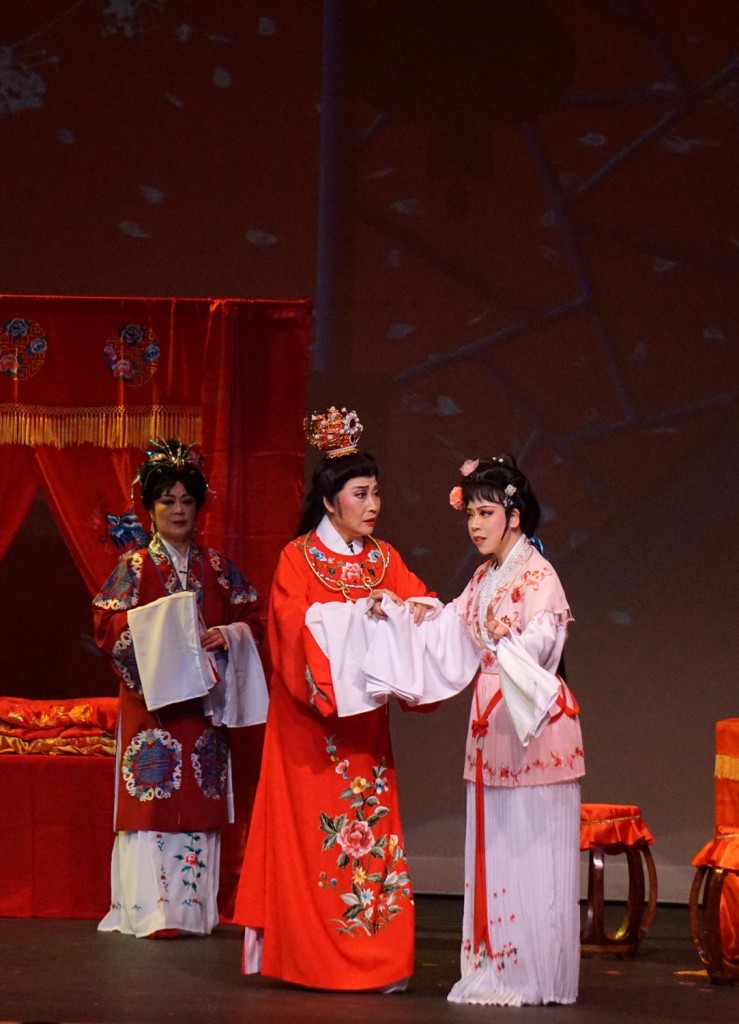 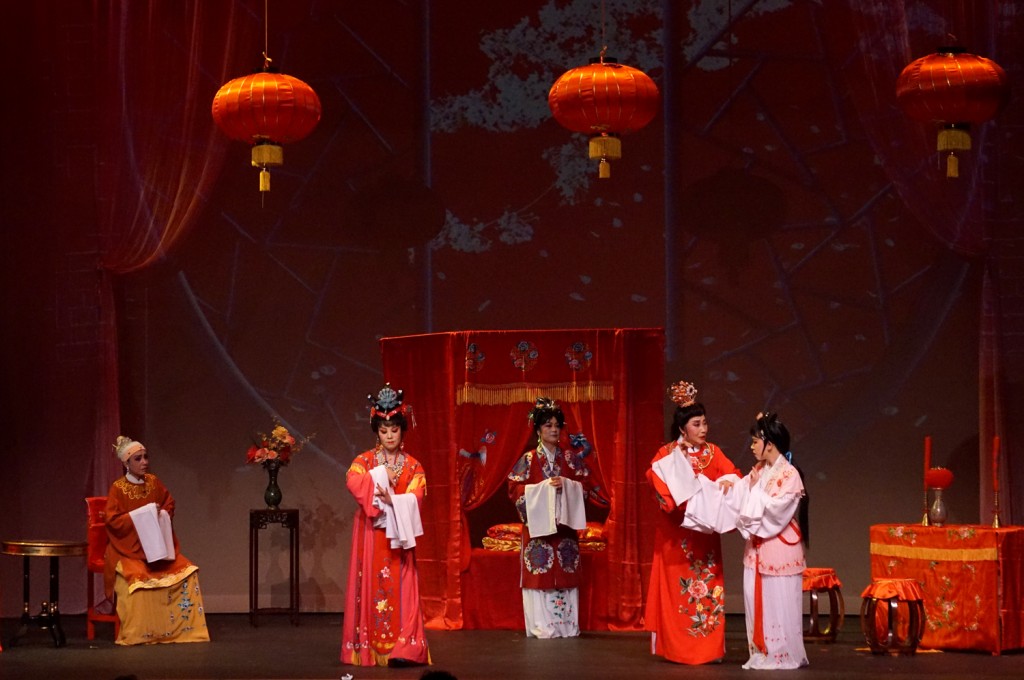 A Dream of Red Mansion

When Baoyu find the bride is not Daiyu, he runs out to Daiyu’s mourning hall with regret.  He then throws away the jade that he was born with and leaves home to become a Buddhist monk. 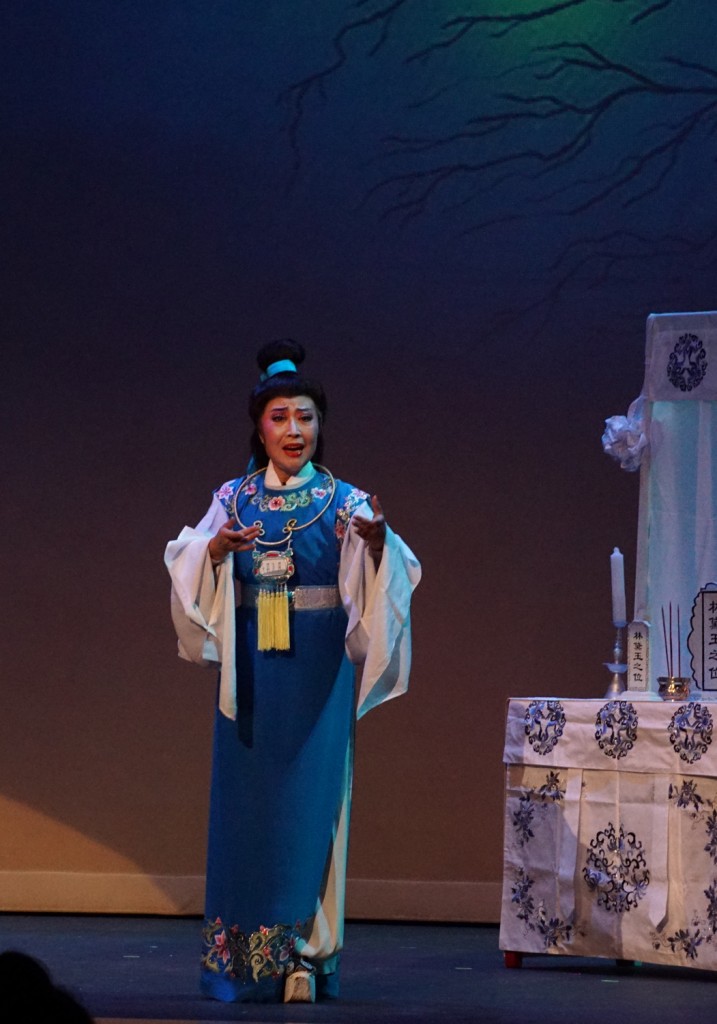 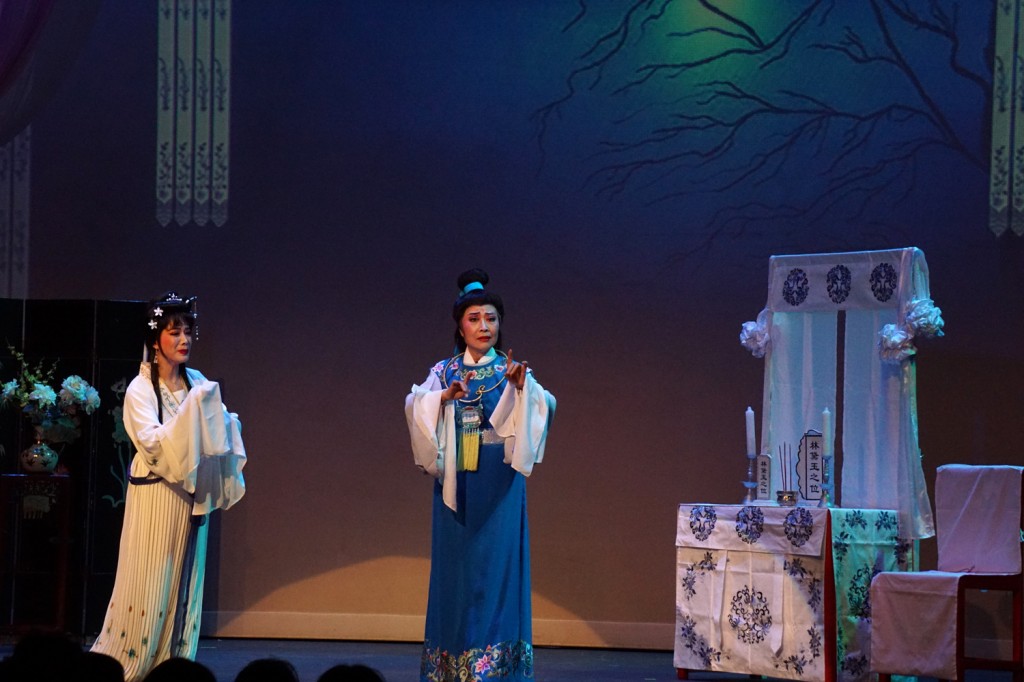